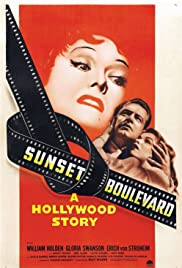 Join film producer, and chair of The Westdale Cinema Group, Fred Fuchs for a Film Talk after the Sunday, September 13 at 7:00 pm screening of Sunset Boulevard.  Fred will share his insight as a Hollywood film producer and answer your questions about the film.  The film talk is included in the price of admission

The Thursday, September 17 screening is mask mandatory. The concession stand will be closed and there will be no food and drink, so masks must stay on during your entire visit.

In Hollywood of the 50’s, the obscure screenplay writer Joe Gillis is not able to sell his work to the studios, is full of debts and is thinking in returning to his hometown to work in an office. While trying to escape from his creditors, he has a flat tire and parks his car in a decadent mansion in Sunset Boulevard. He meets the owner and former silent-movie star Norma Desmond, who lives alone with her butler and driver Max Von Mayerling. Norma is demented and believes she will return to the cinema industry, and is protected and isolated from the world by Max, who was her director and husband in the past and still loves her. Norma proposes Joe to move to the mansion and help her in writing a screenplay for her comeback to the cinema, and the small-time writer becomes her lover and gigolo. When Joe falls in love for the young aspirant writer Betty Schaefer, Norma becomes jealous and completely insane and her madness leads to a tragic end.