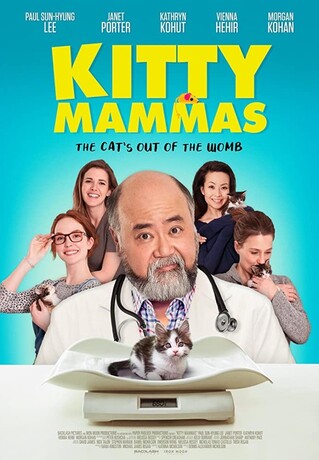 Hamilton Film Festival Presents Kitty Maamas. We’re kicking off, well…pawing off, opening night with a Canadian feature from first-time director Dennis Alexander Nicholson! Meeeoowww!!
A “documentary film crew” captures history unfolding, as a disgraced, but kind-hearted fertility specialist, Dr. William Han (Paul Sun-Hyung Lee) , tries to restart his career, embarking on a breakthrough medical trial in which four women will give birth to kittens!!!
Joan is in it for the money, trying desperately to pay law-school tuition, while her hippie-artist mother begs Joan to surrender to the arts. Sylvia, a working mom, can’t wait to surprise her kids by bringing home a furry pet that her husband isn’t allergic to. Maria and her fiancé, Jennifer, want to start a non-traditional family and put the money towards their wedding. And Rose…. Well, she just loves cats sooo damn much!
The cat-pregnancies must remain under-wraps for the duration of the medical trial, no easy feat considering the four kitty-mammas must hide their symptoms from their families and the world. But when William teams up with a savvy veterinarian from his past, Dr. Theresa Mackenzie, keeping the trial discrete becomes all but impossible. Her jealous ex-husband, Darryl, starts stalking the clinic, hell-bent on exposing the trial and ruining Dr. Han’s life… again.
Now, William must open up about his past, come clean about his feelings for Theresa and enlist the help of the four kitty-mammas if he wants to bring the world’s first truly hypo-allergenic cats into the word.
For Tickets Select Link Below
http://filmfreeway.com/HamiltonFilmFestival/tickets/126213