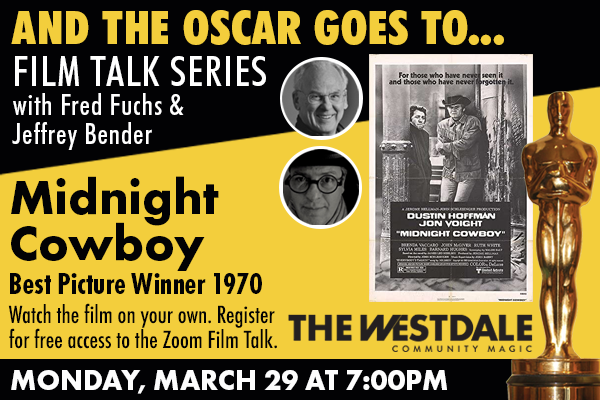 Midnight Cowboy (1969) And the Oscar Goes To… Film Talks

John Schlesinger‘s MIDNIGHT COWBOY in  is a gritty, unrelentingly bleak look at the seedy underbelly of urban American life is undeniably disturbing, and features Dustin Hoffman and Jon Voight in standout roles as a con man and a Texas hustler trying to survive on the tough streets of New York.

Convinced of his irresistible appeal to women, Texas dishwasher Joe Buck (Jon Voight) quits his job and heads for New York City, thinking he’ll latch on to some rich dowager. New York, however, is not as hospitable as he imagined, and Joe soon finds himself living in an abandoned building with a Dickensian layabout named Enrico “Ratso” Rizzo (Dustin Hoffman). The two form a rough alliance, and together they kick-start Joe’s hustling career just as Ratso’s health begins to deteriorate.  It’s the only Best Picture Oscar-winner to have received an “X” rating.

Watch MIDNIGHT COWBOY (1969) on your own and then join Fred Fuchs and Jeffrey Bender to delve into the production, artists, and story of the film.