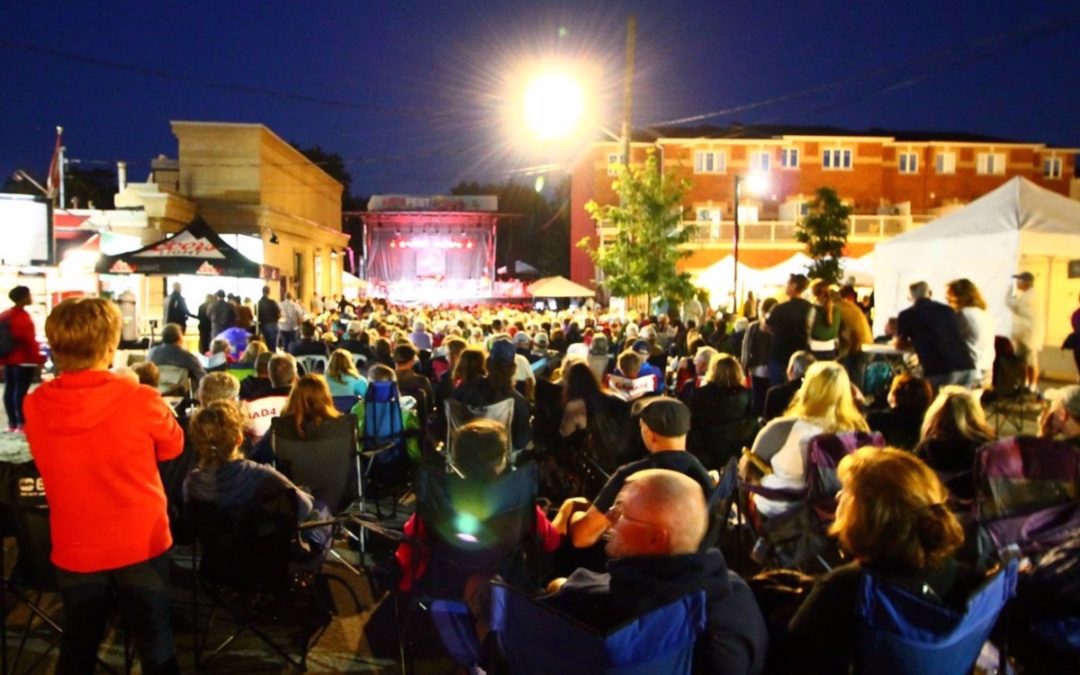 Summer fun has begun at The Westdale! June is a month of new beginnings and new programs. New partnerships abound in our recently restored theatre.

Our team has a full calendar of events and screenings we want to share with you in advance for our June movie listings. What can you look forward to this month? Take your pick – we have tons of great options for everyone!

This month we have the last event in our Creative Soul Series. Host Ian Thomas is joined by Juno & Grammy award winner Dan Hill for an intimate evening of conversation and an unplugged performance. They will discuss the creative process, their inspiration and how to keep one’s creativity alive.

About Dan Hill
Nominated for a Grammy for Best Male Vocal, winner of a Grammy (as co-producer of “Seduces Me” on Celine Dion’s 30 plus million-selling “Falling Into You” album), winner of five Juno Awards and the Harold Moon Award (Canadian Lifetime Songwriting Achievement Award), Dan Hill has recorded and released multiple gold and platinum albums. His classic hits, such as “Sometimes When We Touch” (closing in on 5 million spins in America alone, and covered by hundreds of artists around the world), “Can’t We Try” (#1 Billboard AC Record of the Year), and “Never Thought (That I could Love)”, another #1 AC record, all remain staples of AC radio stations around the world. Dan has also enjoyed consistent success as a ‘behind the scenes’ songwriter, his compositions are recorded by so many artists spanning so many musical genres that it’s, well, incredible.

The Italian Contemporary Film Festival [ICFF] in Partnership with Cinema Insieme and The Westdale present a day-long festival of Italian film.

Travel to Italy without leaving Hamilton. The day begins with a screening at 1:00 PM of the filmDogman.  Directed by Matteo Garrone (2018 Mafia movie, Gomorrah). A story of survival of the fittest, a bully, dignity and unintended consequences.

At 4:00 PM join us for Io Sono Mia (I Am Mia).  The story of one of Italy’s greatest musical interpreters whose unique voice has cemented a place for her in the realm of Italy’s extraordinary singers. Mia Martini (nee Bertè) was a victim of an unfortunate life, subjected to the whims and cruelties of show business. This biopic is a delicately told account of the shameful course of malice that complicated the already difficult life of a fragile and troubled woman and pursued her until her premature death. Complete the day with the film Ricordi (Remember) at 6:30 PM.

Ricordi is a journey through the years of two individuals, united, divided, happy, unhappy, deeply in love, in love with others. Ricordi is the latest film by Valerio Mieli.  Ricordi was presented at the 75th Venice Film Festival and won the Premio Del Publico (Audience Award). The film questions how much we can rely on our memories.  Is that how things really were or did time, mind, and emotions change them?

ALL FILMS WILL BE PRESENTED IN ITALIAN WITH ENGLISH SUBTITLES

Michaela Musolino is known for her fiery and passionate interpretations of both traditional and contemporary Sicilian music. Traveling to Hamilton from her home in New York City, and joined by accompaniest Fabio Turchetti, Michela’s voice weaves both ancient and modern melodies together with Turchetti’s playing and compositions to create a thaumaturgy of rare beauty.

Arrive early and visit an art exhibition by local Sicilian artists on display in The Westdale’s Art Lounge.

Presented by the Sicilia Canta Canada and Festitalia, Hamilton.

We’re thrilled to announce that ArtsFest will be coming to Westdale Village for the first time in June – and to celebrate The Westdale will present two days of free programming during the festival.

ArtsFest is a free weekend-long event which draws visitors from across Hamilton, the GTA and upstate New York. Over 30,000 people attended last year’s festival in Waterdown. This year, we have a variety of entertainment lined up for ArtsFest including film, music, comedy, dance and more!

In between entertainment, stop by our pop-up patio outside the theatre, we will have a selection of old fashioned candy and featured iced cocktails and mocktails including frozen slushie flavours for both kids and adults – while the kids sample classic flavours, the adults can try our Margarita and Cherry Bomb, a cherry flavoured vodka infused frozen drink. It’s going to be yum-yum for everyone!

Amanda Rheaume, whose albums have met with widespread critical acclaim, was the 2014 Canadian Folk Music Awards’ Aboriginal Songwriter of the Year.

Susan Aglukark is Nunavut’s first ever Juno Award-winning Inuk singer/songwriter, has won 3 Juno awards, received The Order of Canada in 2005 and was awarded the Governor Generals Lifetime Artistic Achievement Award in 2016.

We’re excited to have such a talented pair of performers on The Westdale stage!

Tickets to this opening night concert are $20 (plus HST and service fees) and are available online or at the box office.

THE WIZARD OF OZ  – June 22 @ 11:00 am
Runtime: 101 minutes  Rated: G
Lions, tigers, and bears, oh my! We’re starting off Saturday at ArtsFest with a free screening of the classic film, The Wizard of Oz. An absolute masterpiece with groundbreaking visuals for its time, The Wizard of Oz is a must-see film for young and old. Follow Dorothy as she is whisked out of her mundane earthbound existence into Oz – a land of pure imagination. Will Dorothy ever make her way back home – will she want to? You will want to reserve a seat for this free screening

THE HPO BRASS ENSEMBLE  – June 22 @ 1:30 PM
A free concert for the whole family! The ensemble is composed of core musicians in the Hamilton Philharmonic Orchestra (HPO) and has performed for various festivals and school audiences throughout the Hamilton region. The HPO was founded in 1884 and has grown to become one of Canada’s major professional orchestras. Today, they are a leader in Hamilton’s robust arts community.

CINE-PSYCH: Mental Health on Film – June 22 @ 2:30 PM
The Cine-Psych film making team, created by Dr. Nadeem Akhtar (Assistant Professor in Psychiatry, McMaster University) was formed in 2017. The mission of the project was to train junior Psychiatrists to create engaging, cinematic short films that would reflect what we know of mental health problems, stimulate debate, discussion, and better understanding to reduce stigma.

CinePsych will be presenting their latest short films followed by a Question and Answer session with members of the team.

BALLROOM DANCE THAT BREAKS GENDER CODES  – June 22nd @ 4 PM
Join us for a free TED talk style presentation by Trevor Copp and Jeff Fox. Copp and Fox are the team behind “First Dance,” a play about the development of the first dance for a same-sex wedding. They have toured the play at regional professional theaters, festivals and even as part of an international dance festival in Tirana, Albania. Come out to our theatre and learn about the development of their “playing fair” method of sharing the lead in ballroom dance.

TRILLIUM FOUNDATION ANNOUNCEMENT– June 22 @ 7:30 PM
Please join us for a special announcement at the theatre!

SINA BATHAIE in Concert – June 22 @ 8:00 PM
After our Trillium presentation, we will be ending the Saturday evening with a free concert by Persian composer Sina Bathaie.

Bathaie is a Santur player known for his unique style and approach toward Persian contemporary music (Have a listen). His hypnotic performances have garnered fans from across the globe, and after seeing him at The Westdale you are sure to become a fan too!

Drop by The Westdale for a free selection of family-friendly short independent films curated by the Hamilton Film Festival.

Treat yourself to a complimentary chocolate tasting and explore new ways to create and enjoy chocolate with Soma chocolate makers David Castellan and Cynthia Leung, who will invite guests to sample the different flavours from a selection of their delicious chocolates.

Pair these delicious chocolates with a Prosecco at the bar.

COMEDY HOUR –  June 23 @ 4:00 PM
Leave the kids at home and come out for a free laugh to this R-rated comedy show, featuring Manolis Zontanos, Anjelica Scannura, and Patrick Coppolino.

A little bit about the comedians

Manolis Zontanos is a Canadian standup comedian from Hamilton, Ontario and has appeared on The Comedy Network, Just For Laughs, MTV Canada & more.

Anjelica Scannura is winner of the I Heart Jokes award for Best Female Newcomer, she performs regularly at The Corner Comedy Club, The Underground Comedy Club, Absolute Comedy, Comedy Bar, and has just come off a cross-Canada tour.

Patrick Coppolino is a standup comedian from Hamilton, has toured with the likes of Tom Green and Ari Shaffir and has been seen on the CBC, MTV, SiriusXM and more.

THE “BEST OF” THE SIX MINUTE MEMOIR HOSTED BY WRITER ANNE BOKMA  –  June 23 @ 7:00 PM
The Six Minute Memoir is a delightful, free, themed storytelling event Hosted by Anne Bokma with performances by local community members where storytellers spin their stories in 6 minutes or less. Host Anne Bokma has been a journalist for more than 25 years and has written for most of Canada’s major magazines and newspapers.

Ann Hui is the author of Chop Suey Nation: The Legion Cafe and Other Stories from Canada’s Chinese Restaurants. In her role as The Globe and Mail’s national food reporter, she uses food as a lens to explore public policy, health, the environment, and agriculture. Join us for An Author Talk and Reading Event June 26 @7 PM.  Tickets $18 include Film Screening at 8:15 PM

Eat Drink Man Woman
Taiwanese comedy-drama film about Mr. Chu, a master Chinese chef who has three unmarried daughters. Life at the family’s house revolves heavily around preparing and eating an elaborate dinner every Sunday, and the Sunday dinner acts as a forum to which each daughter brings announcements as they negotiate the transition from traditional “father knows best” style to a new tradition which encompasses old values in new forms.

Award-winning bluesman Steve Strongman is launching his newest album and tour at The Westdale on June 28. Come on out for an evening of blues with this accomplished Hamiltonian! Strongman is a versatile talent and a restless one. By constantly pushing himself in new directions, he has kept himself vital. His talent is huge and impossible to miss, and it’s matched by his staggering musical ambition — as guitar-slinger, songwriter or vocalist.

We will return in a couple of weeks to share June’s film calendar and let you in on a few exciting things we are working on for July and August!

Save the dates, mark your calendar, and purchase tickets online or at the box office! For additional information please visit us online at www.thewestdale.ca or email us at info@thewestdale.ca.